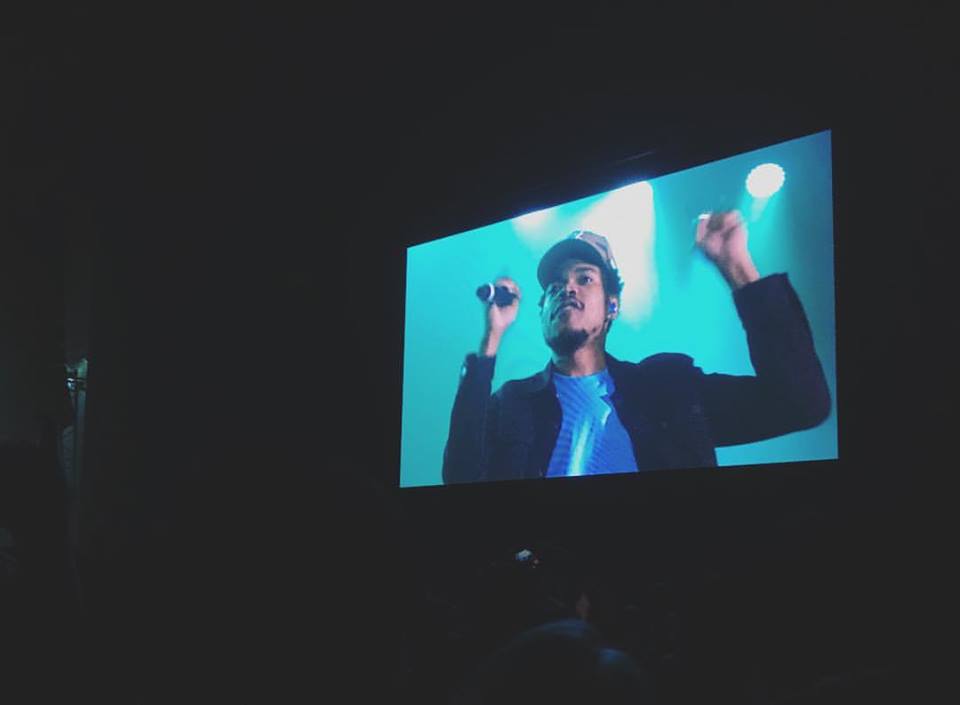 I do not go to shows anymore unless I for sure have an assigned CHAIR.

The idea of pressing into a dark, sweaty and horribly loud venue with hundreds of we-are-barely-even-adults makes my skin crawl. How did I get this old?

But last Sunday a friend posted that he had Chance the Rapper tickets.

This was the exception. If I had the opportunity to just be in the same room as CHANCE THE RAPPER I needed to seize it.

I like music. Sometimes I even love music.
I once started a band. We were terrible.
I sing in the shower. I sing in the car. I sing while making lattes for crabby people.

There have been albums that changed me. But it’s rare.

I value clever lyrics. I value catchy melodies. I always want to hear more toms and I think every band probably needs a trumpet for a song or two. But I am not a person who is obsessed with music or musicians. I want to listen in my car. Alone. With the windows down.

I am telling you this so you know how little I need to be in the same space as a famous person and all their fans.

Except … CHANCE THE MOTHA FUCKIN RAPPER.

His album Coloring Book changed me.

My bones hurt the first time I heard Blessings (Reprise). I needed to hear someone create a spiritual record that is honest and irreverent and fraught with swears and slurs and also blessings.

My faith is unraveling and in the same moment being mended.

I cannot listen to preachers who are afraid to say FUCK. I cannot be in a room with someone who will preach the gospel of blessings and miracles but forget to speak of justice, equity and freedom.

I can’t agree to disagree on matters of race, gender, sexual orientation.

I cannot pretend my country isn’t at war and that my religion is mostly on the wrong team.

But I can let the music of a 23-year-old artist from Chicago pour hope into my bones and sing of the Jesus I think I used to know—the one who always sided with the oppressed. The one born to brown people in a brown city in an area of the world we regularly ignore.

“I don’t make songs for free, I make ‘em for freedom
Don’t believe in kings, believe in the Kingdom
Chisel me into stone, prayer whistle me into song air
Dying laughing with Krillin saying something ‘bout blonde hair
Jesus’ black life ain’t matter,
I know I talked to his daddy
Said you the man of the house now, look out for your family”

It isn’t my birthday. This cake wasn’t made for me, but I am grateful have been invited for a slice.

I scooped up those concert tickets and braved the sweaty masses with my writing partner, Ariel. We pressed deep into the crowd—personal space be damned.

Before the opening act even started I for sure regretted trying to get near the front. The hoard of just-barely-adults smelled like gym bags and weed. Ariel and I tried to hold in our excitement and also our anxiety about the potential we might die in a stampede at a concert venue.

I could not ignore the fact that my entire body was sandwiched between two people I had never met before, so I struck up a conversation with the young women in front of me.

“Are you registered to vote?”

“Do we need to talk about this further? Is it safe to assume I know who you are voting for?”

They both nodded and chuckled.

The girl pressed against my back laughed at herself for singing some of the words wrong to a Drake song playing through the loud-speaker.

I do not possess the ability to bite my tongue.

I tilted my head up toward her, “Can we all just agree that this song is straight-up misogyny?”

I recited the lines to her.

“He left. He is seeing whoever he wants. But he wants her to just stay home and wait around for him? And he is offended when she doesn’t do that? That’s bullshit.”

She cocked her head like she hadn’t thought of that before.

I got my worried auntie face all twisted up and maybe for the first time looked all 30 of my years, “Don’t date men like that.”

“No, seriously. They are not worth your time and they will never respect you.”

I turned forward again. It probably meant nothing to her. (Javetta Laster said this all better than I did and I am tempted to print it out and hand it to people everytime Hotline Bling comes on.)

Ariel and I didn’t last long in the center of the pit. We made our way to the back of the crowd. We even found people who were older than us.

We also found a beyond drunk girl who was completely alone and falling over. We did the only human thing possible—Ariel walked her to the back of the room and took her phone to tell her friends to come get her. I went and found security.

All damn day I felt old.

I am a decent fucking human being.

I swear more—obvs. I don’t do church these days. And I am really crushing this grown up shit. Praise the sweet baby Jesus.

Had the show been cancelled right then I think I still would have left happy.

Chance was amazing. And trippy.

And there was still that one song—when Chance the Rapper sings the hook from a Chris Tomlin praise song—that makes me sure I am about to throw up. I have more triggers than I would like to admit.

I slowed my breathing.

I closed my eyes.

I can let the young man who refuses to sign a record label preach truth to me—laced with swear words and slurs and prayers and old church songs.