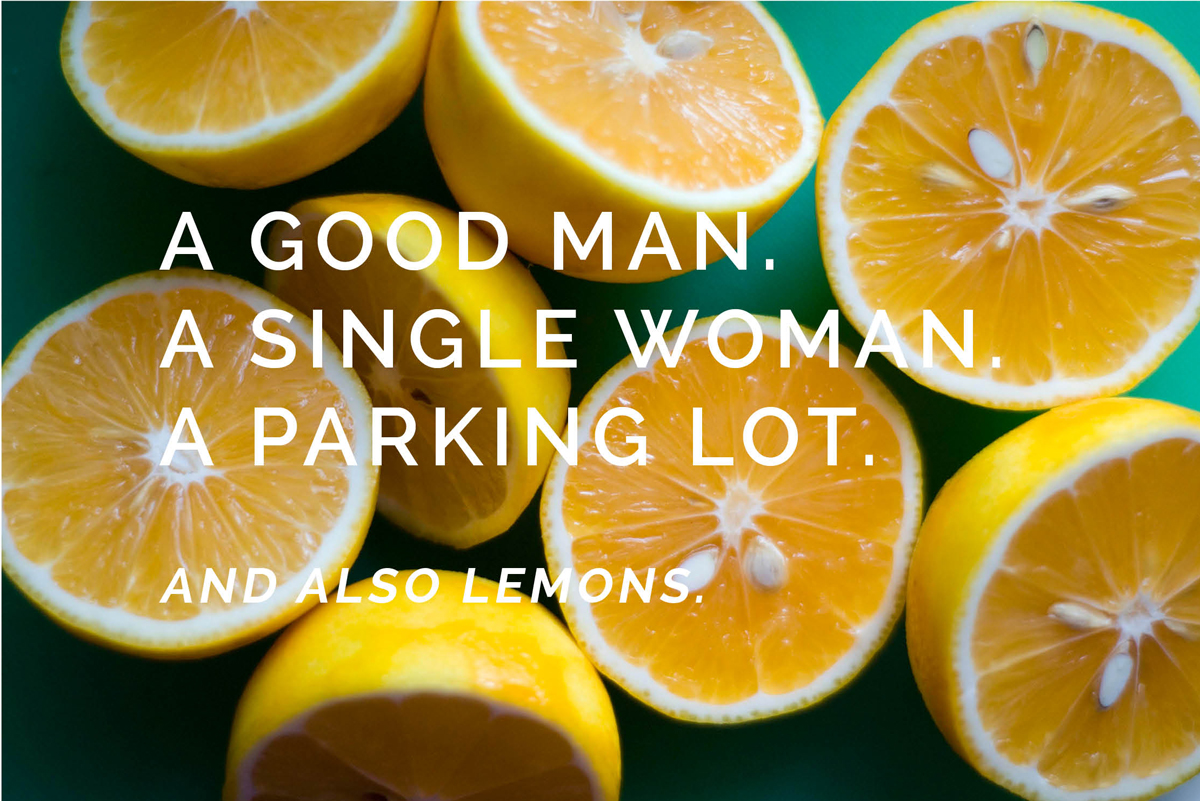 I met Mike in a grocery store parking lot.

Well not really. Let’s start that over.

At 8:30 in the morning I went to the grocery store to buy white conditioner and lemons to turn my periwinkle blue hair back to gray/silver like I had intended. (Did you know you could do that? Fix blue hair? It’s magical, I tell you.)

The lot was nearly empty and I whipped into the parking space too fast, but so did the man in the green Saturn pulling in quick beside me.

I thought I recognized the man in the car next to me, so I stared a little too long into his window and then grinned like a fool to try and compensate for the staring.

But there was a glare on the window so I couldn’t actually tell if it was the person I thought it was, so as I rounded the corner into the doors I kept looking back over my shoulder.

And since all the emotional work I seem to be doing these days is on racial reconciliation, it occurred to me that maybe the backwards glances from a white woman to a black man made me look suspicious of him as a threat. So I slowed my gait so he could catch up to me at the doors. I was on the phone with my brother and I dropped the phone to my side and as we stepped through the doors together I looked him straight in the eyes and said, “Good morning. How are you today?”

His smile lifted his heavy eyelids as he responded, “I’m really good. Thank you.”

He wasn’t the person I thought I recognized after all, but that was fine.

I resumed my conversation with my brother and I shopped. White conditioner. Lemons.

When I came out to my car I could see a paper tucked under my windshield wipers.

I was still on the phone with my brother and I said, “I think the man in the green Saturn just left his number on my car.”

I chuckled and tucked the note into my wallet.

Men my age rarely flirt with me. They almost never give me their number and they don’t ask for mine. Maybe it’s the circles I live and work in or maybe it’s the confidence and the “I definitely don’t need rescued” vibe I give off. Or maybe the very clear “I am not emotionally available” look on my face, but seriously, it doesn’t happen that much.

I pondered texting the mystery man.

I took inventory of my impressions of this stranger. I allowed myself to consider my whiteness and his blackness. To let myself be honest when thinking about this man in his piece of shit car that mirrored my own piece of shit car—since that’s all the information I had about him.

I wondered to myself if I thought his beat up car meant anything about the character of the man. I’d like to think my junky car doesn’t reflect too poorly on my own character. I considered the assumptions people make of me when I drive that bucket of bolts and the assumptions people must make of a black man in his matching junky car. I considered that maybe I was letting my prejudice get in the way of all the possibly great things this stranger could say to me.

I thought about the horrible treatment of black men in our country and decided I know jack-shit about the motives of the smiling man in the grocery store so I sent off a text: “Hey, Mike, were you driving the green Saturn? Left your number on my car?”

Mike: Hey! Yea that was me. Hope I didn’t annoy you but you were on the phone and you have a killer smile. I had to tell you you’re very beautiful.

Sarah: Thank you. That made my day.

M: What’s your name? Is it okay to keep talking to you?

M: I didn’t think you’d message me back.

S: I almost didn’t. You know, stranger danger. But then I thought, why the hell not?

M: Well good fortune only goes to the bold. Some old guy said that.

S: Virgil. He said it in Latin.
Also, I’m not that brilliant. I googled it.

M: Ha ha ha ha. Virgil. Doesn’t get much older than Latin. 2 points for googling it.

S: So what’s your deal? Who are you? Like top 5 things a person needs to know about you?

S: Number 5 … You secretly love that beat up car.

M: I do!! I could get a new one but I’m very sentimental.

We went on like that for a couple days. I swallowed all my fears of strange men and gross texts. We talked about working too many hours at too many jobs and then spending the afternoon building things. Me doing carpentry in the front yard. Him doing electrical work at his cousin’s new place. We had more things in common than I could have imagined discovering via text, but we also didn’t. He awkwardly asked me how old I was and admitted he was relieved when I said 30. He could have been lying, but he said he couldn’t guess and thought I might be too young for him. That was adorable.

But timing is a real you-know-what.

We swapped book titles and tried to make plans that never quite worked.

Then one of my favorite awkward honest conversations:

M: I have a question for you

M: Have you dated black guys before?

S: No. But I haven’t really dated much at all. So the list is short.

S: I’m going out with an Indian man later this week. He’s also a stranger.

M: I need to get my act together so I can take you out.

It was perfectly delightful texting this kind stranger that I never actually met.

I found him charming and interesting and worth talking to. I didn’t make too much out of it, but I was enjoying the moments as they came.

Then I received a text that ended it all in the most beautiful possible way:

M: Hey are you busy?

I wanted to tell you I think you are very very beautiful. I’ll never forget your smile. I don’t know you very well, but I think you’re awesome from what I know.

But my ex and I are going to work things out and that is why you haven’t heard from me.

Shame I never got to know like I wanted. Take care of yourself. Keep smiling.

I don’t think I have ever felt so well-respected by a man in my life.

He didn’t owe me anything. We didn’t know each other. I wasn’t special. We weren’t dating. But he made the choice to explain where he was coming from and what it meant to him. He had several choices at that point: 1) He could have just stopped replying to me and never let me know. 2) He could have kept texting with me while getting back with his old partner and never let either of us know. 3) He could show respect for me and my time and let me know his situation.

I don’t think this is trivial.

Mike is a good man and I learned a lot from such a fleeting romance.

And I should always buy my lemons at 8:30 in the morning.