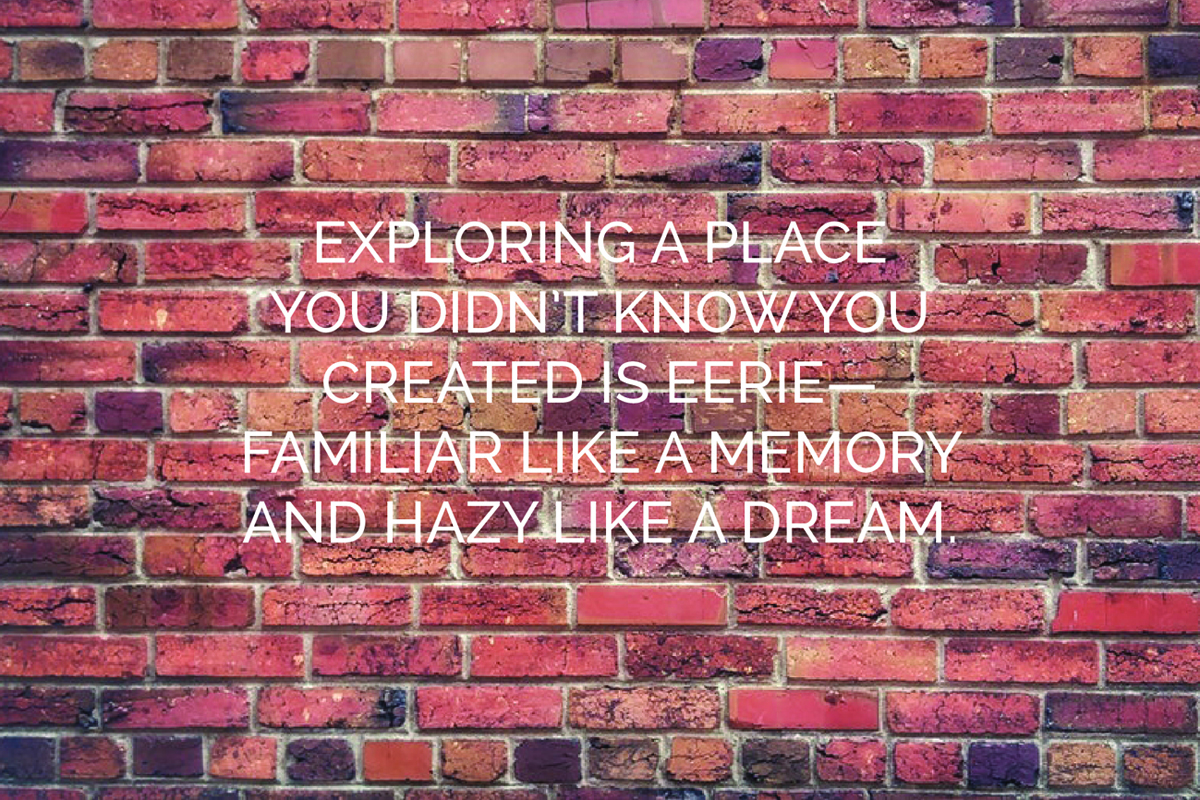 I spent my morning in bed reading half-finished projects and blowing my nose. I like boundaries, but I also like transparency and I haven’t shared anything here in a long time, so I continued this piece from almost three years ago and I just am going to leave it here and let that be okay.

I didn’t realize I had built a wall around myself until I started dating a bearded man on the other side of the country.

We spent hours on the phone sharing and over-sharing. He would open up and be tender and raw and then wait patiently for me to reciprocate.

Pretty sure my usual response was, “Nah, I’m good.”

The more he opened up, the more I withdrew into my fortress.

This bearded man on the other side of the country would lay his soul bare and I’d run around locking up all the windows and doors.

I would try to explain to him that I wasn’t all the amazing things he thought I was. I would tell him he should be stuck in traffic with me or try to spend a day with me when I hadn’t gotten any sleep or when I was PMSing hard. Then he would finally know what an awful person I could be.

He told me he loved me.

All these years I thought what I wanted was someone to love me—someone who knew me and showed up anyway.

But then I hated it.

Here I had been self-describing as an open book—open to new people and new experiences. Authentic.

I think I have been lying.

I started to wonder how deep my internal labyrinth ran. My introspection lead around corners and through doors and over fences.

I could see—not just one wall—a maze of bricks and rebar and bulletproof glass. Exploring a place you didn’t know you created is eerie—familiar like a memory and hazy like a dream.

I knew my relationship would not survive my excavating.

I couldn’t see much, but when I peered through the grimy windows and chinks in each sturdy brick wall I could see who was allowed in and who wasn’t. The bearded man wasn’t.

We didn’t break up. That would be too nice. I literally called him and dumped him.

Dumping him only made it worse.

I didn’t know I had walls and borders and fences until someone tried to get past them. But now that I knew, I couldn’t unknow.

I tried to see beyond the bricks, but even I couldn’t get past my own walls.

I know this is vague. It’s vague for me too.

The best comparison I can make is that fleeting moment when you wake up from a vivid dream. It’s dark in the room and you remember something. Maybe, right? It was just there—right in front of you. You close your eyes tight to bring it back but all you see is darkness. You know you dreamed something spectacular and weird. The only word that comes to mind is purple. Purple? That can’t be right. Why can’t you see where you were or what you were doing?

The vault is locked. Your eyes adjust to the darkness. The clock reads 4:28. You will try to dream for the next two hours, but you won’t.

I decided to play archeologist and excavate a few big sections of my past. I poured over old journals. I thought bringing old bones into the light would give me clues to navigate this fortress.

Turns out there are no easy ways to avoid feeling pain. Burying it only means you get to feel later. Sometimes much later.

The feeling I seem to have unearthed is anger. I am achingly mad right now.

My journals are lined with longing. I pleaded with the heavens for answers and purpose. I wrote about disapproval—from parents, from spiritual leaders, from friends.

If I could, I would go back and give 17-year-old Sarah a hug and tell her she was doing it. She didn’t need to strive and earn—she was already there.

I am mad on behalf of all the previous versions of myself that chose to swallow all those feelings. I’m mad that sometimes 20-year-old Sarah was brilliant, but she listened to people who expected her to be quiet and to behave. I am mad that I didn’t fight against dogma and bad theology that threatened my sense of self and taught me not to trust my own judgment.

I am mad because knowing all of this still doesn’t unlock any of the doors in the fortress that I built.

I am locked out of what feels like the greatest part of myself—the part that still knows how to trust.

Nearly three years ago I wrote about my fortress.

A month after penning those words I started dating someone new—a beautiful man with a smile like the sun. And I decided the only way to know him and be known by him was to work harder at dismantling the fortress.

Turns out it’s really fucking hard to tear down a 30-year-old bunker.

But every single day I pulled at the bricks and in every conversation I told the truth as I knew it. I told this man with a smile like the sun that I was frustrated when I couldn’t communicate my needs. I told him that I needed him to learn to respond and interact with my pain. I asked him to try to open up the doors he kept closed to his own fortress.

I started to learn about the pain I housed inside myself.

I have built up this persona that I am utterly fearless—that I will seek adventure at every turn.

That fearless version of Sarah was a lie.

I told the man with a smile like the sun.

He nodded.
He was agreeable and charming.
But he wasn’t listening.
He didn’t know how.

Once I had started the demolition, there was no way I was going to build it all back up. I took my pain public. I threw open the fortress windows. I knocked down walls. I told anybody and everybody who would listen that I was safe, but I was hurting—that I was lost and I was okay with it. That my faith had crumbled. That my family wasn’t always safe. That I didn’t trust anyone, but that I would keep showing up to try.

The more I shared, the less alone I felt.

The man with a smile like the sun asked me what I needed him to do.

I made my request simple:
Show up.
Bring snacks.

He never did it. Not one time.

When it was time to say goodbye I realized I wasn’t sad. I was only disappointed. I spent so much time trying to be seen and he saw nothing. I learned more about myself in those two years than in the previous 30 combined. But he didn’t learn a single thing about me.

I tried to make it easy to love me.

But it turns out it isn’t easy to love me because I refuse to make myself small.