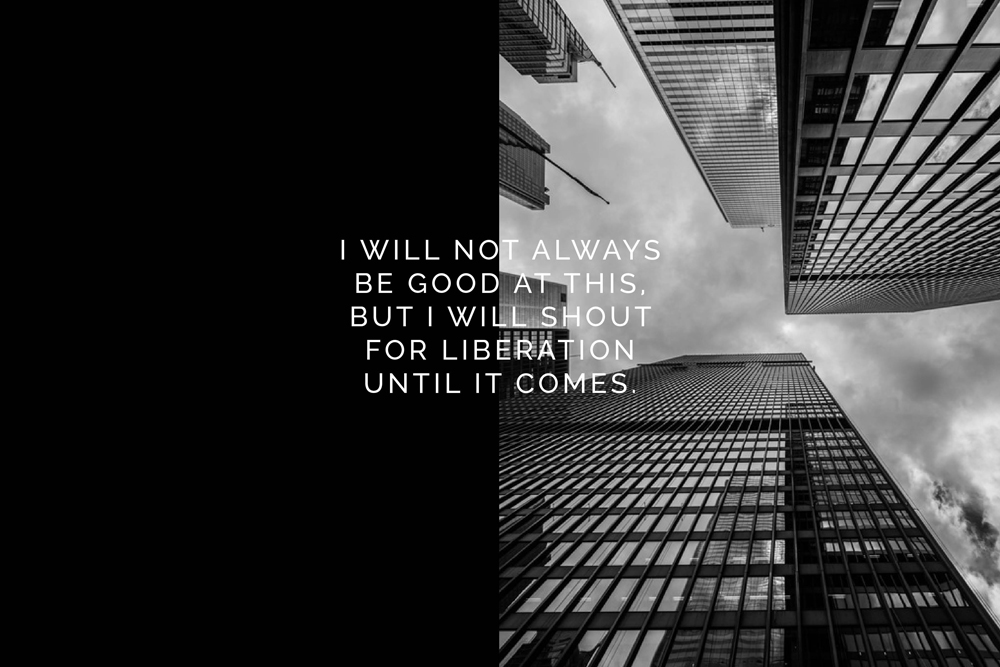 I want to say everything and nothing, all at once.

And because I am white I did not notice the danger until 22 years into my privileged life.

At 22, I was living in a primarily black neighborhood in New Orleans. My black nephew was two years old. I saw him in the faces of the kids on my block. I was barely starting to see the disparity between my life and the lives of my neighbors.

After a year in the south, I returned to the Pacific Northwest and registered for classes: Communications 101, Political Science, Black Thought and Culture.

My Black Thought and Culture class challenged so much of my understanding of my country. Professor E patiently answered the barrage of questions from our very white class. Questions like: “Why didn’t we ever learn about W. E. B. Du Bois and Sojourner Truth in high school?” and “Didn’t racism end with Martin Luther King Jr.?”

We grilled him about Affirmative Action and politics and demographics and geography. We learned words like “systemic” and “institutionalized” and “person of color.” We were told why “black” is often preferable to “African American.” We were instructed to never ask to touch a black person’s hair. Never.

It seemed that to make space for the freedom of others, we would need to give up the idea that we were allowed to do and say whatever we wanted whenever we wanted. It felt uncomfortable to some, and downright offensive to others.

And then he petitioned us to look into the values of a political frontrunner we had never heard of—this young-ish Senator from Illinois who had a big smile and a distinct cadence in his voice.

He didn’t suggest we vote for the very first black president, but he did suggest we look past the media outrage and really take note of this young Senator’s legacy. The work he had done for Illinois. The way he voted on the Senate floor. The way he stood with patience and kindness in the face of racist questions. He asked us to vote for the politics we believed in and said that maybe we would also be making history with that vote.

At that time I lived with people who said things like, “America is the best place on earth,” and “Barack Obama is the anti-Christ.”

I did not have the bravery to speak up. Instead, I quietly voted for our very first black president.

I thought I would feel proud. Instead, I felt embarrassed that it had taken my country this long to even have a black candidate on the ballot.

I saw the pride in the eyes of my black friends and I was ashamed I hadn’t taken their feelings into account before. I felt embarrassed. I felt guilty. I felt defensive.

I got brave with my questions to Dr. Johnson, only my second black professor. He was honest and the honesty stung.

He nicknamed me “Neworlins” because I started most of my stories from that neighborhood where I was a minority. It’s embarrassing to admit that was my only point of reference for racism and blackness and whiteness and priviledge.

Four years later a black boy in a hoodie was shot and only a few of my friends were talking about it. I was sure it was an accident. I was sure the man who killed Trayvon Martin was going to go to jail for a long time.

And then he didn’t.

I imagined my little nephew as a teenager and I cried.

I thanked God we didn’t live in Florida. This is not the kind of thing that would happen in our diverse neighborhood in our diverse city in the liberal Pacific Northwest.

Then an unarmed black boy was shot in a confrontation with a police officer in a place in Missouri I had never heard of before.

That shooting changed me.

There was a phrase people kept saying: “He was a good kid.”

It made me angry. I didn’t care if he was a good kid. It is not just the good people who deserve to be alive. We do not need to paint this story in a better light. Michael Brown should be alive. He should be alive to go off to college, but he should also be alive to tag the side of business or drive a car without updated tags. He might have gotten himself in trouble, but he should still be alive.

Death is not justice.

This cannot be happening.

My sister had to tell her eight-year-old how he should behave outside of their home.

Eight. He was eight.

I lost my ability to have polite conversations about race.

I felt white guilt. I felt awkward. I felt disillusioned. I got un-friended on social media.

I cried some more.

I have started to embarrass myself in front of black people. I am overly friendly. I tell them I like their hair and their smile and their kids and their “Not Your Respectable Negro” tshirts.

I have no chill.

I set down my white guilt, but I pick up white supremacy and I hold it out in front of me. I tell people when I see it. I tell everyone. I ask stupid questions. So many questions.

I catch myself white-splaining. I apologize.

I can acknowledge the whitewashing of history and I am pissed about it. I cannot fix what is broken all on my own. But I join with others who are going to change my country.

I am going to make safe space around me for my black friends and my black nephews and my black neighbors. I will not always be good at this, but I will shout for liberation until it comes.

I am 30 now. May it never again take eight years to open my eyes.