My tiny trailer for my tiny house is really NOT that tiny. Not in terms of HOW MUCH SANDING NEEDS TO BE DONE.

You see, I bought my trailer used. She’s 16 years old. She’s been the foundation for a mobile office (like the kind you see on large construction sites) and for the past decade she’s hauled freight from dock to dock by a very sweet old man whose name entirely escapes me right now. (I’m sad about that, because remembering people is sort of one of my gifts.)

Anyway, she’s been around water and as a Pacific Northwest native she’s been rained on A WHOLE LOT. So she’s rusty. Really rusty.

Enter 3 x 21 belt sander I snagged brand new in box from Tony’s garage FOR FREE. Tony is my hero. 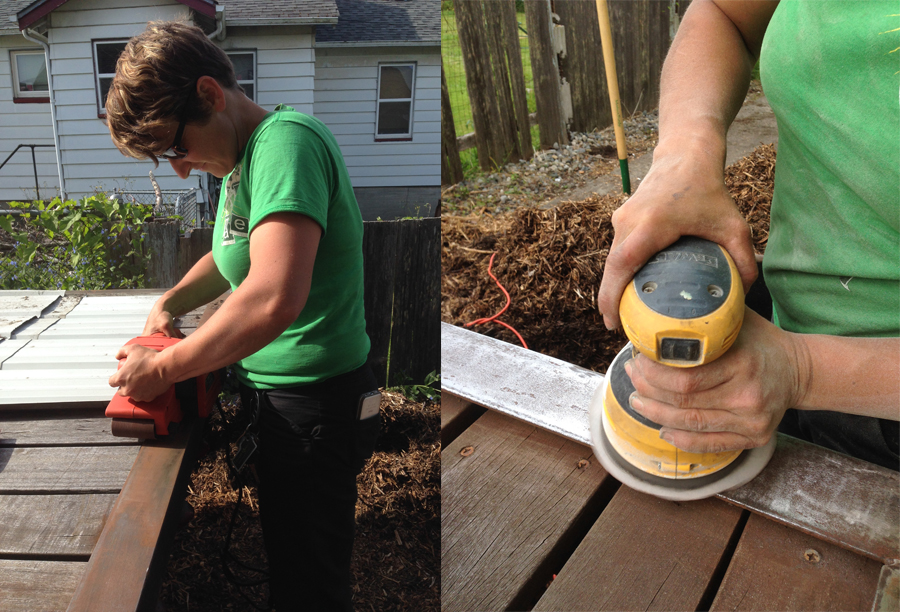 With the help of my incredibly generous, hard-working sister Adina, I got to work sanding down rust. Insert special shout-out to my neighbor Joel for loaning us his orbital sander. You’re going to see a whole lot more of Joel in these blog posts because he’s the king of tools.

Sanding is a longggggggg process and to sand the WHOLE trailer I need to first remove the deck boards—which I’m sure have not moved in a decade. I’ve broken three screw extractor kits getting these darn deck boards off. There are still 12 that I’ll have to drill the screws out of, but at least half the trailer is exposed so I can get to more sanding.

Remember Joel? Well he also loaned me his DeWalt impact drill. Talk about torque. That baby made a world of difference for getting screws out of the rusted metal and old decking. That is, until I broke it. I had a double-sided screw extractor bit that I sort of got jammed in Joel’s drill. We tried everything to get it out—even a vice. No go.

Joel said it was fine and that he’d take it to DeWalt to get it fixed and that I really didn’t have to worry about it. (See, he’s the nicest guy ever.)

That’s not how I roll, so I trekked to Home Depot and bought Joel a new drill.

When I showed up at his door to offer an exchange, I thought he was going to tear up. He told me he didn’t need a new drill, but I’m a persistent little snot, so he didn’t really have a choice.

In the end I was able to fix the old drill, so now Joel has a brand new drill and I have his beat up old drill and the world makes just a little bit of sense right now.

Welp, time to get back to sanding.