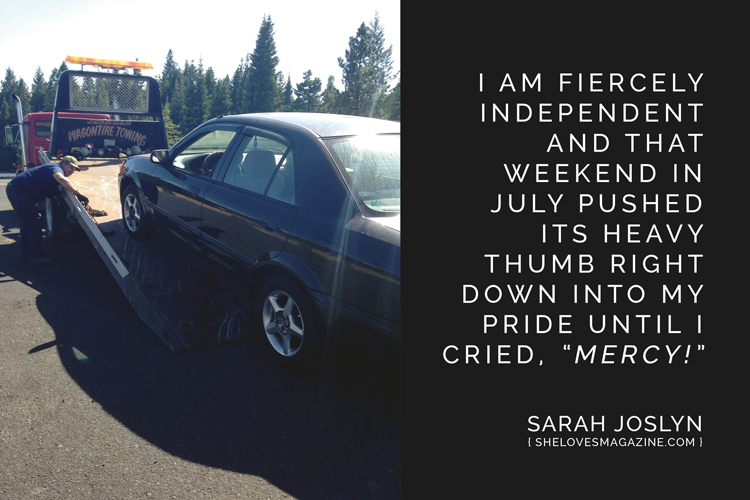 I was tucked into the cushions of a hotel lobby couch listening to 80s pop music in a dry little town in Northeastern Oregon on a Tuesday night.

This was not on my agenda for the week.

I left my house on a Saturday morning with a pile of bedding, a couple cameras, a backpack and a box of pastries. I was stoked to be heading out to the wilderness to meet one of my writer friends from the internet in real life.

I was cruising along with the windows down and my music loud. Until I wasn’t.

My poor car started sputtering and steaming and got as hot as Hades. I was four hours from home and four hours from my destination. I was a mile beyond the exit for Deadman’s Pass. If my road trip was plot, then this was irony or foreshadowing or both.

I muttered a prayer and shouted a swear word and turned off the car I had only owned for three weeks.

Less than a minute later a green SUV rolled up the hill. I didn’t know what I needed, but I knew I needed to flag it down.

That green SUV carried Steve and his daughter Sierra and three teenage boys whose names I lost track of along with my unraveling plans. It turns out Steve and I were swapping locations. He was headed away from Boise, Idaho and headed to a little town just a jaunt from where my house is parked. His crew sat with me for two hours getting sunburned on the side of the road.

If I had leaned just a little farther into pessimism, I would have taken Steve’s offer for a ride all the way home. That would have saved me a little money and a lot of crying. But then, my story would be over and I would have missed a few spectacularly strange adventures. Instead I stood firm in blind optimism.

The mechanical business about my car is frustrating to rehash and a bit dull, so I am going to skip ahead to the part where I text Esther Emery to tell her I’m not sure I’m going to make it all the way to her glorious yurt in the woods.

Esther texts back, “Ok. I’m going to drop my kids home and come get you. Car trips are the best way to get to know a person anyway.”

Guys. She drove four hours to come get me. We hadn’t even met in real life yet.

Our alternative dwelling choices and commitment to downward mobility were the reasons I saw a kindredness in Esther from afar. But the long drive back to her canyon revealed a dozen other connections that made me forget about my broken car.

It is a relief when you can talk about your wild family and your history and the person in the seat next you says, “me too” instead of “oh honey, that’s awful.”

It is a relief to talk and hear, “me too” instead of “oh honey, that’s awful.”

For the record, Esther is the real deal. (Shameless plug: she has a book coming out soon.)

My day with Esther doesn’t need to be immortalized on the internet right now. The short version is this: after a day in the canyon, I have dreams of a piece of land in the wilderness where the water flows unabashedly and the neighbors are far away. I’m tucking that dream away for later, filed next to pages and pages of memoir that still need to be written.

By Monday morning I had almost forgotten about my car, but of course it was still waiting for me in Northeastern Oregon. Esther piled her gorgeous girls into the car and we nestled in for the long drive.

But then, a plot twist …

I turned my phone on as we approached Boise and a text message from another writer friend lit up the screen, “I’m finally in Boise. What’s happening with your car? I’ll drive you to pick up your car. Would be happy to spend time with you.”

The logistics are a little fuzzy here, but there was a cup of coffee, a zipline ride, a goodbye to Esther and the girls, a hello to Amy’s sweet puppy, a rental car and a new four-hour adventure. Amy agreed to stay in Pendleton Oregon overnight with me while a mechanic checked out my car. We burned through all the topics: politics, feminism, faith, romance, relatives, trauma—I mean all the topics.

Amy wondered aloud if we could find a nice place to have a drink. She wistfully mentioned this place should have big flower planters and we could sit outside with the dog.

On the very next block we found just the place—flowers and outdoor tables and great beer and even better coffee. I began to hope the magic of Esther’s canyon and Amy’s generosity would somehow carry over to my pending car repairs. I whispered a prayer and held it close.

By Tuesday morning I was ready to just hop in my car and go home with pockets empty, but a trunk full of stories and adventures.

I had already missed the only bus that would get me home and had checked out of the hotel. So I sat outside the gates of a graveyard in a town I didn’t know and I cried and cried and cried some more.

After all the generosity from so many beautiful friends, I felt guilty wallowing in self-pity.

So I walked the mile back to the mechanic and paid the $234 for the labor that attempted to fix my car. I took my alumni license plate frame and the pile of bedding from the trunk. I pulled up my big girl panties and negotiated a pick-up of the car with the local wrecking yard.

I am fiercely independent and that weekend in July pushed its heavy thumb right down into my pride until I cried, “Mercy!” I had to smile and accept the kindness of my extended community—to let them love me with long drives and warm coffee and homemade pizza.

I took a deep breath and called on one more friend to drive four hours to come rescue me and take me home.

And that’s how I found myself tucked into the couch cushions of a hotel lobby listening to 80s pop music in Northeastern Oregon on a Tuesday night in July.